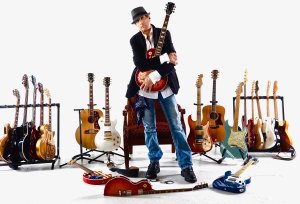 Kernersville – Mr. Bart Hamilton Walsh, 56, passed away from natural causes on Saturday, November 2, 2019 at his residence. He was born on May 14, 1963 in Forsyth County to Ray Hamilton and Velda McMichael Walsh. He was a 1981 graduate of East Forsyth High School and later attended East Carolina University, Cal State North Ridge, and Musicians Institute of Technology. Bart had a love for music in every way imaginable. From playing an array of guitars, to building them, and then to writing and producing music. He was a veteran guitarist who was best known for playing in the Van Halen tribute band, The Atomic Punks. Bart would later perform with the likes of David Lee Roth and Bret Michaels. While working at Gibson Guitars, he traveled all over and held clinics to educate buyers of the Gibson products.

Bart was preceded in death by his father, Ray. Left to cherish his memory are his mother, Velda Walsh; his brother, Brad Walsh (wife, Tammy); and his nephew Michael Walsh.

A memorial service for Bart will be held at 3:00 pm on Saturday, November 9, 2019 at Goodwill Baptist Church, 3110 Piney Grove Rd, Kernersville, NC 27284, with Pastor Greg Mullis officiating. The family will receive friends one hour prior to the service at the church. In lieu of flowers, the family requests that donations be made to Goodwill Baptist Church. Hayworth-Miller Kernersville Chapel is assisting the family.