Share a memory
Obituary & Services
Tribute Wall
Read more about the life story of James and share your memory.

Dr. James Francis Toole died peacefully in his home at Arbor Acres in Winston-Salem, surrounded by his wife, Patricia, of 69 years and his four children, on Sunday, September 12, 2021. He was 96.

Chair of the Department of Neurology at Atrium Wake Forest University Hospital for twenty years, professor of Neurology at the Bowman Gray School of Medicine, and founding director of one of the first stroke centers in the country, Dr. Toole's mischievous wit and professional care touched tens of thousands. Students came to him from Japan, India, Korea, Russia, eastern Europe, the Middle East and South America. His colleagues were from around the world. During his career, he treated North Carolina citizens, celebrities, titans of industry and royalty with equal insight and little fanfare. It was common for him to be stopped at the store or while overseas by a grateful patient or family member.

His curiosities were many.

He learned to love music from his vivacious Atlanta debutant mother, Helen. She taught him bridge and the lyrics to show tunes and popular ditties from the 20's on the piano she played. He sang those songs for the rest of his life. Jim loved big band jazz, which his father Walter introduced him to in the speakeasys of Pittsburgh. He also learned construction from his father, and in Pittsburgh became a carpenter with a union card at age twelve. When Pearl Harbor was bombed in 1941, his father directed Jim to enlist in the Navy and designate himself pre-med. Walter had seen trench warfare in France as an artillery man in General Pershing's World War I Expeditionary Forces.

Dr. Toole was educated at Princeton University and Cornell Medical College. In 1948, at age 23, the Navy sent him to Cuba to study tropical medicine. He later earned a master in law from LaSalle University while serving as a flight surgeon on the aircraft carrier U.S.S. Guadalcanal.

Sent abruptly to the Korean War in 1951 as a forward MASH officer, Jim sent home letters and a request for a chromatic harmonica. In later years he entertained his young children to their embarrassment with poor renditions of Careless Love, which he "mastered" on twelve different instruments, including the ocarina and autoharp.

In Korea, he earned the Bronze Star with a V for valor, helping lead his surrounded battalion through enemy lines under heavy fire one moonless night during the 1951 Chinese Spring Offensive. He came home after six months convinced of the waste of war and with troubled dreams. He spoke rarely of what he had seen during that time.

In San Francisco wearing Navy whites he met the daughter of a family friend. That fall Patricia Wooldridge returned east to Smith College in Northhampton, Massachusetts and Jim, in Pensacola for flight surgeon training, built his flight log with weekend flights to Massachusetts. Pat married him a year later, in October 1952. She was with him for the remainder of his life, holding his hand, offering spirited conversation, helping him connect with friends and great ideas.

Courted by better known institutions in the country, Dr. Toole joined the faculty of the Bowman Gray School of Medicine in 1962 and soon became the Walter C. Teagle Professor of Neurology. There he taught, treated patients and conducted clinical research for the rest of his professional life, with an inspiring sabbatical at the Scripps Institute of Oceanography in La Jolla, California. He relished the freedom to experiment and explore new ideas with the exceptional colleagues who had all chosen Bowman Gray. Together, they developed a national and international reputation for exceptional medical care.

Jim brought his work home. Having correlated the high incidence of stroke in America's south with high cholesterol diets, he banned bacon and eggs from his children's breakfast. His was a style of medicine that emphasized prevention over cure by pills and invasive procedure. He walked to work every day for 25 years, and took the stairs when others rode the elevator.

After South Africa's Christian Barnard conducted the first heart transplant in 1967, Dr. Toole led the first ethics committee of the American Heart Association. Together, the committee he chaired set out to determine when death occurs, and how to assure informed consent during randomized trials when some patients receive experimental treatments and others receive placebos. Those informed consent rules continue to guide the study of new treatments and COVID-19 vaccines, and they resulted in laws concluding death occurs when the brain ceases to function even when the heart continues to beat. This groundbreaking work allowed this country to perform heart transplants that still are not legally available in many other countries, and to lead the world in clinical research that ethically investigates the effectiveness of medical therapies.

He was a lifelong student of history and how the cognitive impairment of world leaders like Franklin Roosevelt, Woodrow Wilson and others affected the lives of ordinary people and the course of history. Dr. Toole convened politicians, historians, clinicians, lawyers and three former presidents – Jimmy Carter, George Bush, and Gerald Ford – to develop working protocols to identify presidential impairment while balancing public disclosure with patient confidentiality. This work, revolving around the 25th amendment of the U.S. Constitution, was adopted by the Clinton administration and remains the most comprehensive exploration of the topic.

Jim loved adventure. In 1952, he drove across the country with his younger brother, Bud. Twenty years later, he drove his young family back from La Jolla in a VW pop up van. He loved to sail, ski and ride horses, and shared those passions with his children.

Dr. Toole's professional activities included presidencies of the World Federation of Neurology, the International Stroke Society, the Academy of Neurology and the American Neurological Association.

The celebration of life will be held at 2pm Saturday, September 18 at Highland Presbyterian Church, 2380 Cloverdale Avenue, with a reception to follow. Covid protocols will be followed, and masks will be required. In lieu of flowers, the family requests donations be made in Jim's honor to Wake Forest Baptist Health Comprehensive Stroke Center, Medical Center Boulevard, Winston-Salem, NC 27157. 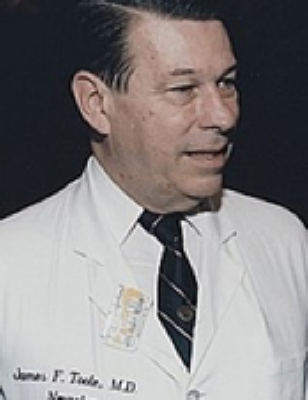